When a baby dies there is nothing that seems right.

In the order of life we are born, live, grow, age, and then die. A baby who dies challenges our sense of how things are ‘supposed’ to be. But death does happen to children and babies and it is likely that at some point in your life, you will know someone who walks this dreary path.

Those on the outside are left searching for what to say and it seems there are more things NOT to say than there are to say.

Day 6 of Capture Your Grief: What Not to Say 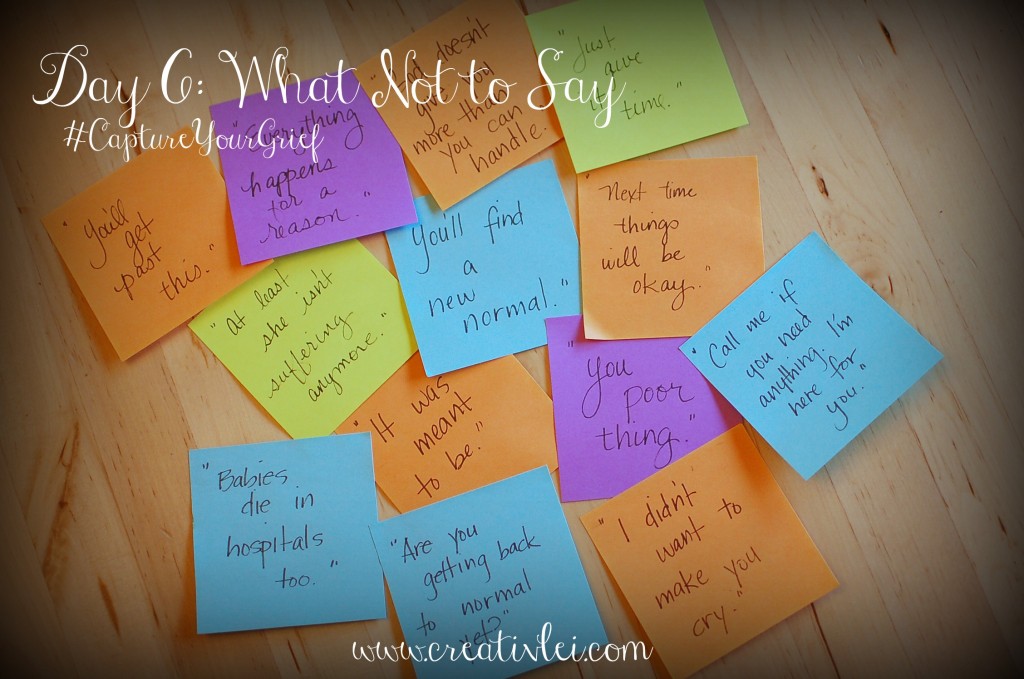 [pinit]
I am grateful that I have not heard some of the ignorant comments I’ve heard made to others. Unfortunately there have been many things said to me that were hurtful even when not meant intentionally to hurt.

Are you getting back to normal yet?

The first time that was said to me was probably less than a month after Miranda died.

There is nothing normal about being a surviving parent. Our society does not recognize the loss of a child. Children who lose their parent are orphaned. Men or women who lose their spouses are widows/widowers. There is no title for a parent that has to bury their child.

Babies in hospitals die too.

Since losing Miranda I have been vocal about the unspoken risks of homebirth and any time I speak I am almost immediately told about how death of babies is common in hospitals. Death of healthy full term babies is not common at all.

It was meant to be.

Usually said in some combination with “It was God’s will.” “She would not have had any quality of life.” “God doesn’t make mistakes.”

I believe in God’s sovereignty over our lives, but I don’t think that means He wills for untimely or preventable deaths. I believe that by His providence He will make beauty from the ashes, but that He grieves our losses as well.

Next time things will be okay.

There was an assumption by many that God would bless us with another child in the wake of Miranda’s death. Many told me stories of their children born after miscarriage. It did not serve to comfort me. I wasn’t looking for a replacement, I miss Miranda and knew God meant for her to be my 6th child. Many of those that were hopeful of a ‘next pregnancy’ also tried to assure me that things would be different and everything would be okay the ‘next time’. That wasn’t a promise anyone could make. My next pregnancy ended in an early miscarriage. Another loss.

When I share my story or document this journey it isn’t in an effort to gain sympathy. Sharing is part of healing and a way to reach out so that other mothers who battle this storm will know they are not alone. I do not want pity. I hope for understanding.

Everything happens for a reason.

Everything happens… and often there is no reason. Please don’t tell a grieving parent that their loss had a reason. You don’t know it, and many of them will never know of any reason.

At least she isn’t suffering anymore.

I realize that with her death, Miranda was freed from the pains of earth. But there isn’t any reason for any one to ever say this. I would give anything to have her for another day. I never wanted her to suffer, but I would never find a day that I was ‘ready’ to say goodbye.

You’ll get past this.

I don’t want to ever be complacent about the loss of life. It isn’t something to get past or get over. It is something we live through.

Just give it time.

Time isn’t a healer, God is.

God doesn’t give you more than you can handle.

This is probably the top phrase that actually makes me angry. Primarily because it is misquoted scripture. It is taken out of context and applied to things it was never intended to. You will never find the phrase “God does not give you more than you can handle” anywhere in the Bible. The only text that comes close to that is 1 Corinthians 10:13 “No temptation has overtaken you but such as is common to man; and God is faithful, who will not allow you to be tempted beyond what you are able, but with the temptation will provide the way of escape also, so that you will be able to endure it. “  (emphasis mine) This passage is talking about temptation, not suffering, not endurance, not trial, or tribulation. Do not say this phrase to anyone that is suffering. It is very likely that the trial/illness/loss they are walking through is much greater than anything they can handle.

Call me if you need anything. I’m here for you.

Walking through our loss we had many needs. Unfortunately, at the time of loss we couldn’t always recognize or communicate those needs. The very last thing on my mind was picking up the phone to call someone. Do not expect the person suffering loss to call you. Take the first step. Don’t say you’re “here for me” unless you are sitting next to me and are truly present in the moment.

Those that made the greatest impact on us in the newness of grief were those that didn’t call or message or write, but those that showed up, they brought a meal, they watched our other children, they did laundry, they cleaned bathrooms, they hugged me, and they cried with us, they showed up at the hospital and prayed over Miranda, they put their lives on hold to stand by our side during our darkest days.

By far the worst thing to say is… nothing at all.

I didn’t want to make you cry.

My deepest hurts have come from those that say nothing about Miranda. Those who have never acknowledged her life and passing. Those that speak to me about everything else and never mention her name. Those that qualify their lack of words by saying that they didn’t want to say something that would make me cry. No one has control over my emotions. Hearing my daughter’s name may bring tears to my eyes, but it is joy in the acknowledgment of her significance, the recognition that she mattered.

Do not wipe away the days I carried her in my womb and sat by her bedside as if they never happened.

I do not have 5 children, I have 6… and I love them all and want to share that with those that know me. Miranda may not be present on this earth, but she remains in the hearts of me, my husband, and each of our children. They speak her name everyday. If you say that there are 5 of them, they will immediately correct you.

In a time where there really are no words there is one thing that is appropriate to say.

**Capture Your Grief is a 31 day photo challenge created by CarlyMarie. For each day of the month during October (Pregnancy/Infant Loss Awareness) bereaved parents are encouraged to share their journey through photographs as a way to share the healing process. I am participating in this series and will resume sharing our homeschool journey, recipes, and life in general in November. Thank you for your thoughtful understanding while I share my heart this month.** 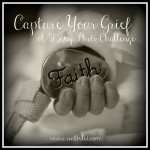 free goodies straight to your inbox

« Celebrating a Baby's Memorial
What to Say When a Baby Dies »

This site uses Akismet to reduce spam. Learn how your comment data is processed.

Stay up to date

Subscribe to get the latest newsletters and special offers

Stay in the know with monthly newsletters